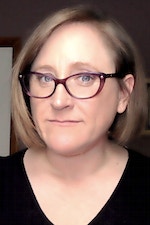 Dr. Kathryn Jasper earned her doctorate at the University of California, Berkeley in History and Medieval Studies in 2012. She is Associate Professor of History and Director of European Studies at Illinois State University:

Jasper serves as the co-Leader of the Latin Section in the Department of Languages, Literatures, and Cultures. If you are interested in the Classical Studies Minor, please visit:

If you would like to know more about Paleography Illuminated, an online hub for transcriptions of ISU's manuscript collection, please visit our site:

If you would like to know more about Traveler's Lab at ISU, a collaboration among universities bringing together students and professional scholars to study medieval history using digital methods, please visit:

My courses examine the major social and political transformations of the Roman and medieval Mediterranean Basin, from Western and Central Europe, to North Africa, Byzantium, and the Middle East. I ask that my students engage multiple sources beyond documents, such as monuments, art, and architecture. Some of my courses include an undergraduate seminar on the city of Rome, a graduate seminar on the historiography of the central Middle Ages, the Italian Renaissance (usually taught as part of the ISU Orvieto study abroad program), and a two-part class on the Middle Ages from 200-1100, and 1100-1500, respectively. I teach Latin 115, the Introduction to Paleography course, and Advanced Latin Paleography in the Department of Languages, Literatures, and Cultures.

I study approaches to rural land tenure in religious houses during Late Antiquity and through the central Middle Ages, especially in northern Italy. I am also interested in how people communicated and disseminated ideas about land management. My background in archaeology affords me a unique perspective in terms of theory and praxis, and my current project incorporates both documentary and physical evidence. At present I am completing a book on how interactions with the natural environment and contemporary economic practices influenced religious behaviors. How did a reformed congregation behave economically amidst an increasingly more commercialized economy, an environment constantly in flux, and waves of new religious movements focused on poverty during the twelfth, thirteenth, and fourteenth centuries? Constructions of “wilderness” shaped interactions with the physical world in Renaissance Italy. The book's inherent interdisciplinarity combines the fields of history, economic geography, archaeology, and environmental studies. Consequently, the project utilizes different tools to address its research questions. I use Geographical Information Systems (GIS) to map property acquisitions over time. Data from archaeological survey shows the physical characteristics of specific landscapes and places. Finally, qualitative data analyzing software serves to isolate and pattern the frequencies of terms pertaining to property, infrastructures, and stewardship in relevant documents.

College of Arts and Sciences
2019